The Backbone of Good In-Game Animation

The human back bone, or vertebral column consists of 33 vertebrae, of which 24 are articulated and 9 are fused at the base of the spine. In games, we don’t usually deal with the bones of the sacrum and coccyx, and we often deal with the neck as its own assembly, so that leaves the 17 vertebrae of the thoracic and lumbar regions from which to derive what we consider the character’s spine. As having independent animation controls on all 17 bones is generally considered too unwieldy for the animator and unnecessarily expensive for the game, almost every human game skeleton you find will contain a reduced set of bones for animating the spine. 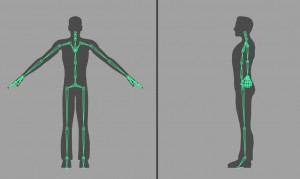 The image above represents a simple, but fairly typical, in-game character skeleton. Having 3 bones for the spine below the base of the neck makes it relatively easy to animate for, and will even give a reasonably decent performance when played back in-game. That is, until you start applying Inverse Kinematics, Character Physics or other Procedural Animation controls to the character, at which point we start to see effects like these: 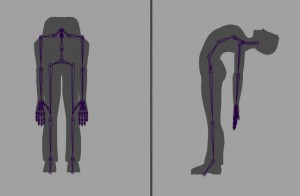 Note the unnatural curving of the chest 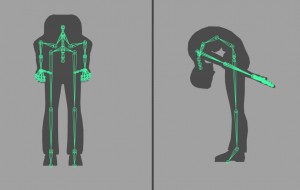 Similarly, the unnatural bend in the back creates a hunch-back effect

What’s happening here? Despite the spine being divided, fairly evenly, into vertebrate that are roughly the same size along the majority of its length, not all vertebrae behave the same way. Most notably, because the vertebrae along the Thoracic Curve (from the base of the neck to the base of the rib cage) are articulated with the ribs, they are, for the most part, immobile. Almost all rotation & flexion of the spine takes place in the 5 vertebrae of the Lumbar region, directly below the ribs.

This places a pretty rigid constraint on the deformation of the back. Even trained contortionists are subject to this limitation: This will provide much more natural deformations under procedural control: 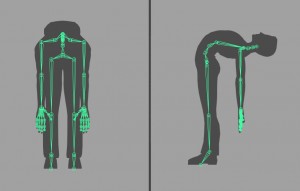 Note the chest retains its shape, and the bend in the lower back more closely matches what we see in real life 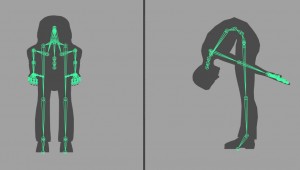 More natural bend in the spine

It’s a relatively minor change to adjust the location of 3 bones, but it makes a huge difference in the believability of the character motion, and while the effects are fairly obvious for realistic human characters, this same principle of remaining true to the underlying anatomy of the subject applies to non-human or cartoonish characters as well.

As Walt Stanchfield, wrote in “Drawn to Life: 20 Years of Disney Master Classes:”

Anatomy, of course is essential to any drawing whether it has a direct reference to nature or is completely imaginary. Though a character and/or its action may be greatly exaggerated or caricatured, anatomy in a real sense remains fairly constant, an elbow is an elbow and only bends in a certain way, and has its limitations. Liberties may be taken but the “reality” of even a cartoon must be kept or it will lose credibility.

Please let me know if you have any questions, comments or suggestions and thanks for visiting!

Sorry, the comment form is closed at this time.